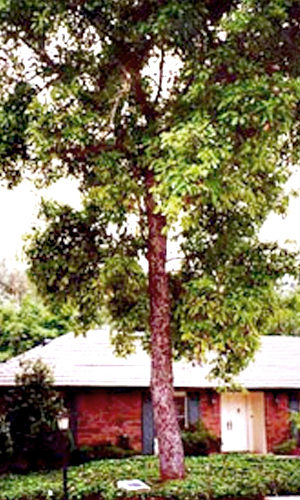 The original tree was really a mistake - a lucky chance seedling. In the late 1920's, Mr. Rudolph Hass, who was a postman, purchased seedling trees from A. R. Rideout of Whittier, for the purpose of developing two acres of budded trees of the Lyon variety. It was Rideout's custom to plant very small seedlings at orchard spacing (12' x 12') at the grove site. The seedlings were grown in 2"x2" x 8" tarpaper open-ended tubes of square cross sections. The seedlings were to grow in place for a year, or until well established, and be later budded in the field.

Hass' children first brought the tree to his attention. They preferred the fruit. Since the quality was high and the tree bore well, Hass patented it in 1935. The same year he ordered 300 trees propagated to this variety by H. H. Brokaw of Whittier. Hass never planted the ordered trees; however, he entered into an agreement that Brokaw grow and promote the variety in consideration of splitting gross tree income 25% for Hass and 75% for Brokaw.

That wasn't an easy decision in those days because the Hass fruit differed so dramatically from the Fuerte, which was the standard of the industry. Nonetheless, Brokaw began to propagate the rough, black Hass exclusively and promote it in favor of the then standard varieties. He and Hass felt justified inasmuch as the Hass was a far better bearer than the Fuerte and matured at a different time of year. Because of the seasonal advantage Brokaw was successful to the point of yearly sellouts of his nursery crops of 3 to 10,000 trees. Selling price was $5.00 per tree and against (Fuerte tree) prices varying from $3.50 in good years down to $1.25 in poor ones.

The Hass was at first thought to be an upright-growing variety since it was found crowded among other upright growing seedlings. Its season was advertised as being from May to November, even in the La Habra and Whittier areas. Brokaw maintains that this was so, just as the Fuerte commonly held until June in those days. He blames smog for earlier seasons in all varieties.

Despite speculation to the contrary, nobody knows what variety of seed produced the Hass. Rideout was an innovator and pioneer in avocados and used whatever seeds he could find - many times planting them along streets or in neighbor's yards in search for new varieties. Ironically, the Hass was one he hadn't intended to leave as a seedling.

The original Hass tree died and was removed in the fall of 2002.